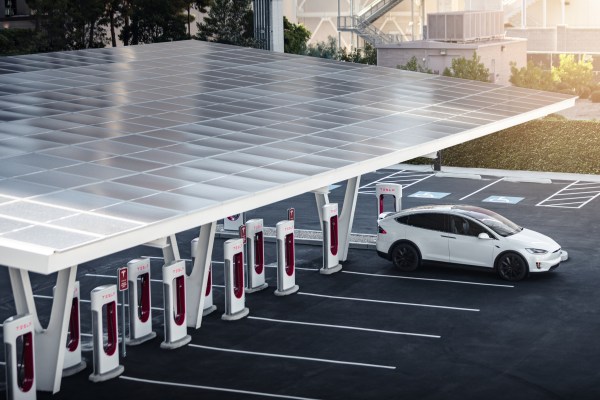 The new V3 Supercharger, which supports a peak rate of up to 250 kilowatts, is designed to dramatically cut charging times for its electric vehicles. Tesla unveiled its first V3 Supercharger in March at its Fremont, Calif. factory. A second V3 Supercharger is located in Hawthorne, Calif., near the Tesla Design Studio. Both of these locations, which were initially used as test sites, lack two key Tesla products.

This new location in Las Vegas is considered the first V3 Supercharger. It’s notable, and not just because of the size — there are 39 total chargers in all. This V3 Supercharger also uses Tesla solar panels and its Powerpack batteries to generate and store the power needed to operate the chargers. The result is a complete system that generates its own energy and passes it along to thousands of Tesla vehicles.

There are caveats to the capabilities of this Supercharger station. Only one Tesla vehicle — the Model 3 Long Range iteration — can charge at the peak rate of 250 kW. The 250 kW results in up to 180 miles of range added to the battery in 15 minutes on a Model 3 Long Range.

The company’s new Model S and Model X vehicles can charge up to a 200 kW rate.

However, even older Model S and X vehicles and more basic versions of the Model 3 will experience faster charging rates at this location because there is no power sharing, a standard practice at Tesla’s other charging stations.

Improvements to charging times are critical for the company as it sells more Model 3 vehicles, its highest-volume car. Wait times at some popular Supercharger stations can be lengthy. Early adopters might have been content to wait, but as new Tesla customers come online, that patience could dwindle. And as more of these V3 Superchargers come online, potential customers might be encouraged to buy the pricier long-range version Model 3.

Tesla has said in the past that these improvements will allow the Supercharger network to serve more than twice as many vehicles per day at the end of 2019 compared with today.

The V3 is not a retrofit of the company’s previous generations. It’s an architecture shift that includes a new 1 MW power cabinet, similar to the company’s utility-scale products, and a liquid-cooled cable design, which enables charge rates of up to 1,000 miles per hour. Tesla uses air-cooled cables on V2 Superchargers.

Vodafone to launch 5G in seven UK cities in July

Itmagazineme - May 15, 2019 0
Telecom / Frequencies
By Juan Pedro Tomás on MAY 14, 2019 Vodafone announced that it will commercially launch its 5G network in seven cities across the U.K. on July...

Fugaku: ARM-based Japanese supercomputer is now the fastest in the world

Huawei furore leads inevitably to a global polarisation of the tech...

Ways to Free Up Storage Space on Windows